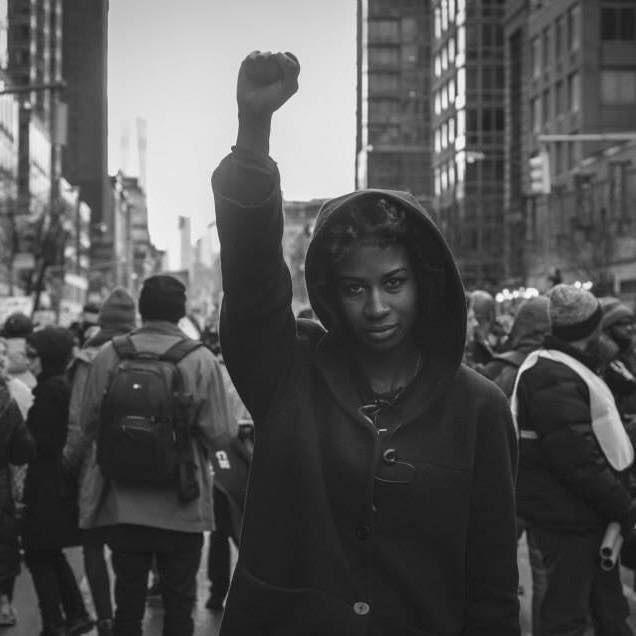 The activists and leaders who live and breathe this movement for justice bring you WHOSE STREETS? – A documentary about the Ferguson uprising. When unarmed teenager Michael Brown is killed by police and then left lying in the street for hours, it marks a breaking point for the residents of ST. Louis County. Grief, long-standing tension, and renewed anger bring residents together to hold vigil and protest this latest tragedy. In the days that follow, artists, musicians, teachers and parents turn into freedom fighters, standing on the front lines to demand justice. As the National Guard descends on Ferguson, A small suburb of ST. Louis, with military grade weaponry, These young community members become the torchbearers of a new wave of resistance.
For this generation, the battle is not for Civil Rights, but for the right to live.

Director’s Statement
Every day Americans experience a mediascape that humanizes whiteness, delving into the emotional lives of privileged white protagonists while portraying people of color as two-dimensional (and mostly negative) stereotypes. Nowhere was this more apparent than in the case of Mike Brown, who, in spite of being college bound & well regarded by his community, was portrayed as a “thug” and a “criminal.” For this reason, it is essential that Black people be the ones to tell our own true stories.

Ferguson has experienced media colonization since August 9th; as all eyes turned to the protests, the Grand Jury, and the response to the non-indictment, people became desensitized by the scenes of chaos. The image of Mike Brown’s tragic final moment, pants low, one shoe strewn across the street, became a meme. The victim, a young boy with a bright future, became an object of discussion -subject to apathy, judgment, and even ridicule, but rarely compassion. The dehumanization of Mike Brown was perpetrated by his murderer, perpetuated by the media, and reinforced by violent police repression of his community. This was a modern day lynching.

We are intimately aware of how we are portrayed in the media and how this portrayal encourages both conscious and unconscious racial bias. We are uniquely suited to make this film because we ourselves are organizers, activists and we are deeply connected to the events of August 9th and beyond. We are making this film, in part, as tribute to our people—our deeply complex, courageous, flawed, powerful, and ever hopeful people—who dare to dream of brighter days. This is more than a documentary…this is a story we personally lived. This is our story to tell.

Sabaah Folayan
Sabaah Folayan is an activist and storyteller born and raised in South Central LA. As an advocate at Rikers Island, Folayan interviewed incarcerated people about their experiences with trauma. She later helped organize The Millions March, one of the largest marches for racial justice in New York history, in response to the non-indictment of the police officer who choked Eric Garner to death. Folayan entered the world of storytelling through theater, attending the Lee Strasberg Institute of Theatre and Film as a teenager, and performing as a member of the Black Theater Ensemble while a pre-med student at Columbia University. In September 2014, she went to Ferguson with cinematographer Lucas Alvarado-Farrar to learn the truth behind the dramatic scenes playing out on the news. Hearing the stories from the community inspired her to embark on her directorial debut Whose Streets?, landing her a coveted spot on Filmmaker Magazine’s annual “25 New Faces of Independent Film” along with Co-Director Damon Davis. Folayan recently directed an episode of Glamour Magazine + The Girl Project’s Get Schooled web series presented by Maybelline. She is a 2015 Firelight Media Producers Lab Fellow, 2016 Chicken & Egg Accelerator Lab Fellow, and 2016 Sundance Institute Documentary Edit and Story Lab Fellow.