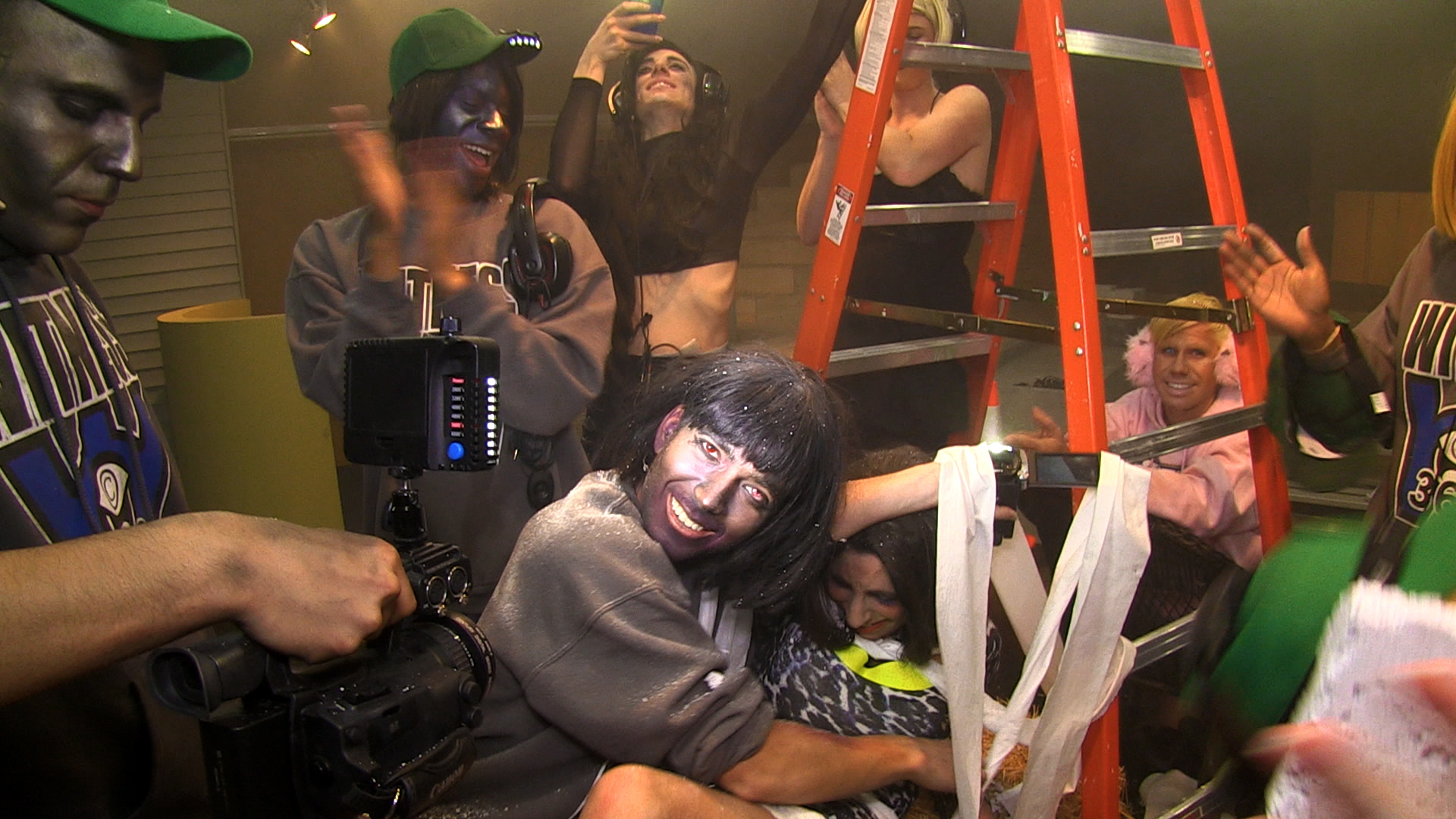 Ryan Trecartin (b.1981, Webster, Texas) is an artist whose practice has been responsible for a range of work that proposes a fundamental shift, disposing of the hierarchies that have fixed the understandings of our positions in culture, offering in their place an ever-expanding set of possibilities from which to draw.

In Kitchen Girl, Trecartin’s frequent collaborator Lizzie Fitch throws herself into a state of total hysteria, portraying a girl who takes the childhood game of “playing house” to a dark and disturbing place. After pretending to cook dinner for her “kids,” represented by colorful plush toys, she finds them lacking in appreciation of her efforts and throws them out the window. Fitch’s overwrought performance is perfectly matched by Trecartin’s skillful, hyperkinetic editing. Together they turn Trecartin’s kitchen into a dimly lit world of mental trauma. Combining the innocuous with the malevolent, Fitch and Trecartin escort the viewer on a whirlwind tour of household dysfunction, child abuse, and isolation – Electronic Arts Intermix

Trecartin describes (Tommy-Chat Just E-mailed Me) as a “narrative video short that takes place inside and outside of an e-mail.” Trecartin’s intense visualization of electronic communication is inhabited by a cast of stylized characters: Pam, a Jewish lesbian librarian with a screaming baby in an ultra-modern hotel room; Tammy and Beth, who live in an apartment filled with installation art; and Tommy, who is seen in a secluded lake house in the woods. Pam, Tommy and Tammy are all played by Trecartin, who, wearing his signature make-up, jumps back and forth between male and female roles. Totally self-absorbed and equipped with vestigial attention spans, the characters are constantly communicating with one another on the phone or online. Their e-mail exchanges and Internet searches are channeled into bright animations that intersect with the “real world” locations. The story moves from person to person like a browser surfing through Web pages. Engrossed in manic electronic interactions, the characters become increasingly isolated and solipsistic – Electronic Arts Intermix

Part of a quartet of movies called Re’Search Wait’S, Roamie View : History Enhancement reveals the character JJ as a husk of his former self. In the movie he hires Roamie Hood’s company to roam backwards through time to research an opportunity for an edit that could alter his future-present. With Backseat Grace and Liberty Lance, Roamie enters the suburban lair of three average teenage boys and then an animated environment strewn with stock footage videos of female assistants  in both corporate and shopping settings. Traversing times and possibilities as if they were physical places, Roamie View : History Enhancement foregoes the importance of grasping who one is in favor of where – Kevin McGarry

In Junior War, a throng of high schoolers congregates at night for a party in the woods sometime in the year 2000. A band plays, the kids get drunk, the boys and girls tepidly flirt, and groups deploy into cars for the purpose of destroying mailboxes, tee-peeing houses, breaking lawn ornaments, and sparring with the police. The film is composed entirely of footage Trecartin took during his senior year of high school in exurban Ohio; as such, it baits the viewer with genealogical significance. The film is incontrovertibly “source material,” but it’s also rigorously repurposed, just as any social media #tbt marks the present more reliably than it renders the past – Chris Glazek

In Comma Boat, we’re stuck in a mock-authoritarian fantasy — a power trip. The film centers around a director-character played by Trecartin who oscillates between feelings of omnipotence and self-doubt. As if a post-human, post-gendered reincarnation of the Fellini character in 8 ½, the director gloats and frets about professional and ethical transgressions. “I know I lied to get ahead,” he admits at one point. “I’ve made up so many different alphabets just to get ahead in my field.” The director is fancier now, but the fear nags that he might be “repeating” himself “like a dumb soldier ova and ova and ova and ova.” The meta-connection to the artist’s own career, while obvious, is also a decoy. All art, at some level, is about the artist. Here, reflexivity is the surface level, providing a decodable veneer that encases something more unsettling and complex – Chris Glazek