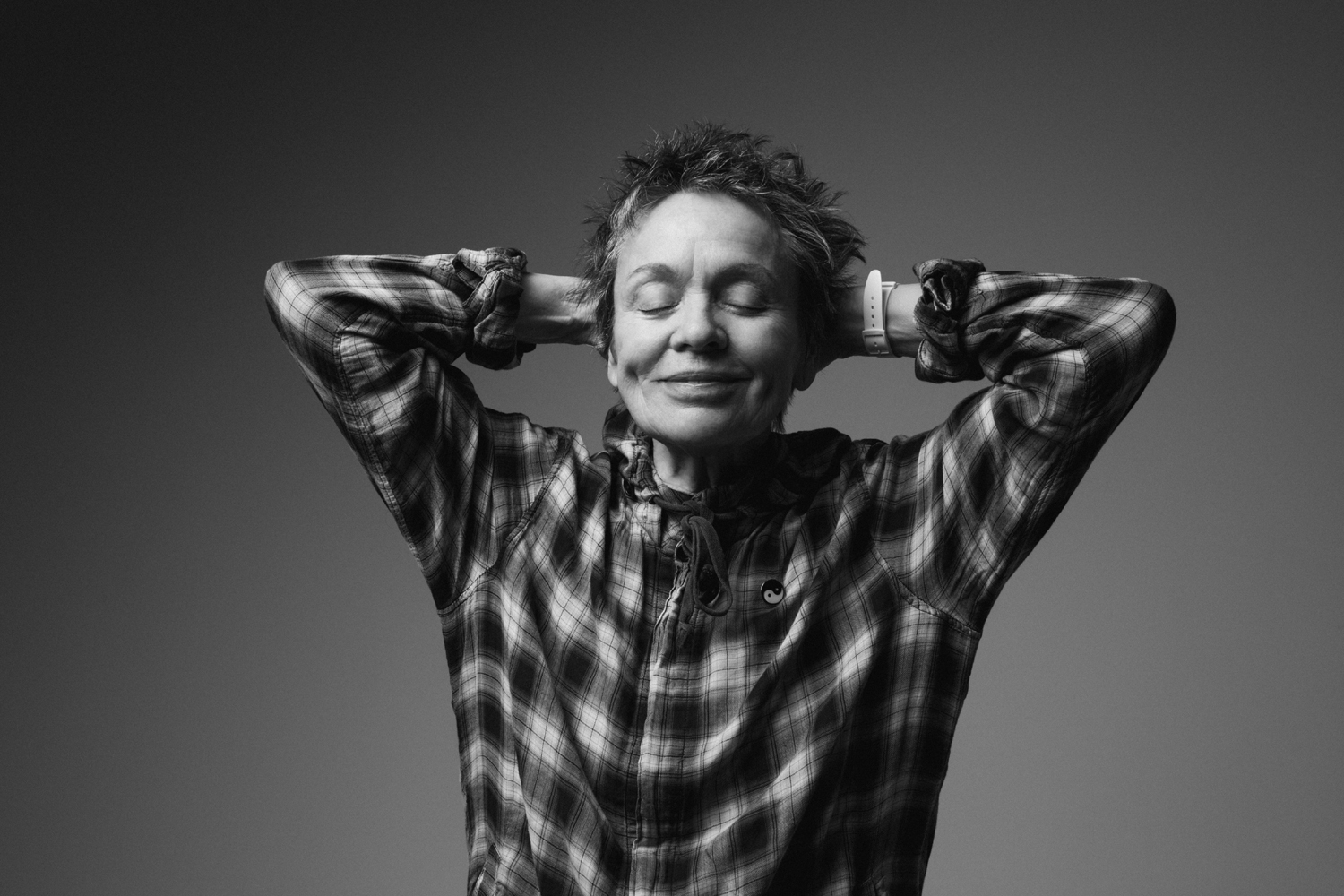 Anderson will discuss the role of sound and music in her own work as well as in some of the scores she has written for other films. Included will be Carmen, What you mean We? O Superman, Beautiful Red Dress, Personal Service Announcements, Chalkroom and Heart of a Dog.

All the Things I Lost in the Flood
A reading and performance with music visuals and electronics
Wednesday, April 11, 7:30 PM, Athena Cinema
Tickets: $15.00

“The world is made of stories and as stories escalate and get shorter and shorter until they’re ten word tweets and as our sense of reality continues to shred, we see that this is not a political situation, it’s an existential one-” writes Anderson, “And we suddenly see: we’re drowning in our own stories.”

Laurie Anderson’s new book All the Things I Lost in the Flood is a series of essays about stories and language. In celebration of the publication of the book (released by Rizzoli in February ‘18) the artist will present a limited number of performances. The performance All the Things I Lost in the Flood includes visual images- many of them previously unpublished- as well as intimate performances with commentary of some of her iconic work with voice, electronics, codes, narrative styles and digital language. The evening also includes accounts of many of the artist’s projects, operas, installations and inventions as well as an inside look at the artist’s methods, strategies, failures and Plan B’s. A book about performance comes to life again as a performance.

Copies of All the Things I Lost in the Flood will be available at the show.

Chalkroom
Presented at the GRID Lab, E.W Scripps Hall, Rooms 216-230
FREE and open to the public.

Chalkroom is a virtual reality work by Laurie Anderson and Hsin-Chien Huang in which the reader flies through an enormous structure made of words, drawings and stories. Once you enter you are free to roam and fly. Words sail through the air as emails. They fall into dust. They form and reform.

Laurie Anderson is one of America’s most renowned – and daring- creative pioneers. She is best known for her multimedia presentations and innovative use of technology. As writer, director, visual artist and vocalist she has created groundbreaking works that span the worlds of art, theater, and experimental music.

Her recording career, launched by “O Superman” in 1981, includes the soundtrack to her feature film “Home of the Brave” and “Life on a String” (2001). Anderson’s live shows range from simple spoken word to elaborate multi-media stage performances such as “Songs and Stories for Moby Dick” (1999). Anderson has published seven books and her visual work has been presented in major museums around the world.

In 2002, Anderson was appointed the first artist-in-residence of NASA which culminated in her 2004 touring solo performance “The End of the Moon”. Recent projects include a series of audio-visual installations and a high definition film, “Hidden Inside Mountains”, created for World Expo 2005 in Aichi, Japan. In 2007 she received the prestigious Dorothy and Lillian Gish Prize for her outstanding contribution to the arts. In 2008 she completed a two-year worldwide tour of her performance piece, “Homeland”, which was released as an album on Nonesuch Records in June 2010. Anderson’s solo performance “Delusion” debuted at the Vancouver Cultural Olympiad in February 2010 and will continue to tour internationally into 2011. In 2010 a retrospective of her visual and installation work opened in Sao Paulo, Brazil and later traveled to Rio de Janeiro.

In 2011 her exhibition of all new work titled “Forty-Nine Days In the Bardo” opened at the Fabric Workshop and Museum in Philadelphia. That same year she was awarded with the Pratt Institute’s Honorary Legends Award. Her exhibition “Boat” curated by Vito Schnabel opened in May of 2012. She has recently finished residencies at both CAP in UCLA in Los Angeles and EMPAC in Troy, New York. Her film “Heart of a Dog” was chosen as an official selection of the 2015 Venice and Toronto Film Festivals. In the same year, her exhibition “Habeas Corpus” opened at the Park Avenue Armory to wide critical acclaim and in 2016 she was the recipient of Yoko Ono’s Courage Award for the Arts for that project. Anderson lives in New York City.

In 2017 Mass MoCA’s Building 6 opened, beginning a fifteen year rotating exhibition of work from Anderson’s archive as well as a platform to present new works. Included in 2017’s opening, Anderson and Chien-Chen Huang premiered their first collaborative VR works “Chalkroom” and “Aloft”. “Chalkroom” has been featured in film festivals all over the world including The Venice Film Festival where it won the award for “Best VR Film” under its Italian title “La Camera Insabbiata”. Anderson continues to tour her evolving performance “Language of the Future” and has collaborated with Christian McBride and Philip Glass on several projects in 2017. Anderson continues to work with the activist group “The Federation” which she co-founded in 2017.

In February of 2018 “Landfall”, a collaboration between Anderson and Kronos Quartet was released through Nonesuch Records. Commissioned by Kronos Quartet in 2013, the work was inspired by the devastating effects of Hurricane Sandy. Also in February Rizzoli released “All The Things I Lost In The Flood” a book of images and a series of essays about pictures, language,and codes.

Posted in Out of Competition, Special Events 2018